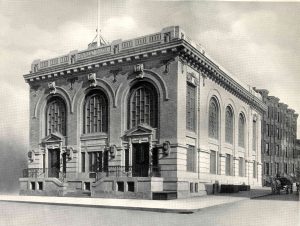 Another Lucy Moses winner that Old Structures worked on is a gem of a building located at 227 Fourth Avenue in Brooklyn. The building was completed in 1910 as Brooklyn’s Public Bath No. 7, and was described as being the most ornate public bath in the borough. The building is a City landmark, and is listed on the National Register of Historic Places. The facade is a combination of glazed, white brick and terra cotta, with multistory arched window openings. The ornament is based on the theme of water.

Initially Old Structures was asked by the architect to provide structural design for the parapet wall and cornice repairs. The goal was to salvage as much original material as possible and re-set the units to their original, non-displaced locations with stainless steel anchorages. Unfortunately, the underlying conditions exposed at the top of the building were much, much worse than anticipated. The structural columns supporting the roof, and the spandrel beams between columns, were frighteningly corroded; the roof was shored immediately. The facade, with a very large height to thickness ratio, was not tied back positively to the steel frame, another serious concern. 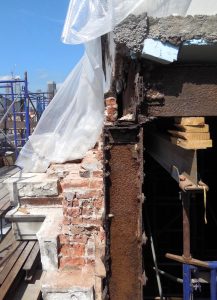 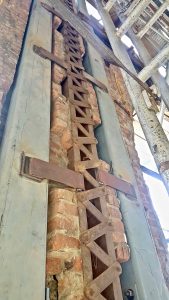 OSE came up with a remedial plan to install new pairs of tube steel columns next to the existing, slender lattice columns, install new spandrel beams, transfer the roof load to the new steel, reinforce the facade wall with slender stainless steel rods concealed in bed and head joints, and tie the facade back to the new columns and spandrels. I served as the Principal-in-Charge, and Shaquana Lovell the project manager/lead engineer.