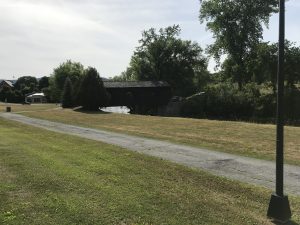 A nice little park in Ticonderoga, New York, on the edge of the Adirondack Park, and it has a pretty little covered bridge. People think of covered bridges as being a New England phenomenon, and particularly a Vermont one, but there are a fair number of covered bridges in New York as well. The problem is, this isn’t one of them. Here’s the inside: 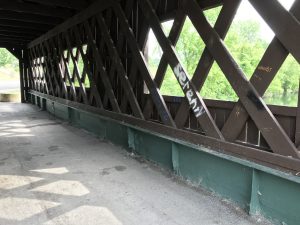 That’s a steel girder actually supporting the roadway, and given that the stiffeners are welded to the girder proper, it’s a relatively modern girder. The wood above is purely decorative, aping the form of a covered bridge. Actually it’s not even a particularly good imitation, as the lattice truss of a real covered bridge tends to be denser (with the diagonals closer together) than this.

Covered bridges were a rational design response to a particular problem: how do you build a strong and durable bridge using short, small-dimension pieces of wood? The use of wood for the superstructure was a given in the mid-1800s, as stone would have been too slow and too expensive. The use of wrought iron would have been too expensive and require expertise that was not readily available in the rural communities where the bridges were built. On the other hand, a clever carpenter could build a lattice truss without much difficulty, which solves the “structural mechanism that only uses short, small-dimension lumber” issue; the roof both provides lateral bracing to the slender trusses but it also helps protects them from weathering quickly. The roof, combined with the plank siding that is a feature of most of these bridges, turned them into little houses in terms of waterproofing. This was critical as small-dimension lumber has a high surface-area to volume ratio and therefore rots (and, for that matter, burns) more rapidly than heavy timbers.

The park where this bridge sits used to be a mill site occupied by International Paper. My guess is that the bridge was part of the industrial infrastructure, and when the mill was demolished the bridge was prettified with the sides and roof. There’s no crime here, but to quote an expert: it’s a fake, a phony.