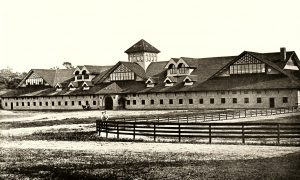 Yesterday’s mystery picture was a shot of the interior of the Breeding Barn at Shelburne Farms in Vermont. I was recently in the building, being shown around (for the second time, actually) by Doug Porter, who was the architect for the most recent repair campaign.*

The building is almost 400 feet long and, as the exterior photo above shows, has a reasonably complex roofscape. It’s no surprise that the roof framing plan is a bit complicated, as seen in the HABS drawing:

Yesterday’s photo was partly straight up the central tower/clerestory, which is why it had that strange bifurcated appearance. More normally-angled shots give a sense of the roof’s combination of long rafters, purlins, trusses, and tension-rod girders. 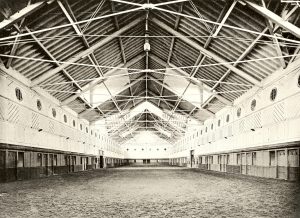 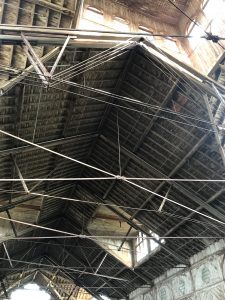 The trusses, as seen in the photo above, have timber top chords in compression and steel or wrought iron eyebar bottom chords. There are also those strange crossed extra bottom chords, which apparently were an original-construction addition to correct a design error. 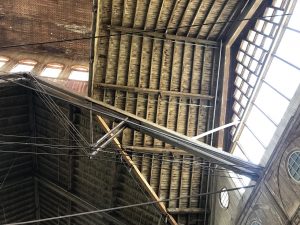 That’s another angle capturing the inside of the central tower, along with one of the mostly-glass cross-gable end walls. 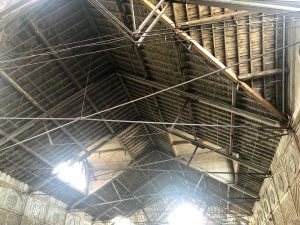 The big hip rafter running from the center of the top edge to the center of the right edge is a good example of one of the tension-rod girders: a large timber strengthened by an iron or steel lower chord, held off by two pipe struts.

The use of mixed timber and metal is interesting, especially given that the architect was R. H. Robertson, who was based on New York and, as the designer of several early skyscrapers, not shy about using steel framing. He may have felt that the mixed materials were more appropriate in a rural setting, it may have been a cost-saving measure, it may have been what his client wanted…we’ll never know for sure. But the result is an amazing mostly-wood roof; a simple gable with dormers but on a scale that makes the structure a significant piece of building history.

* It’s important to emphasize that I had no role other than observing the results, as I am describing here. The talented team that worked on the barn included Doug, Ron Anthony, and the late Dave Fischetti as the structural engineer. Click on the “recent repair campaign” link above for a full list of the people and firms involved.