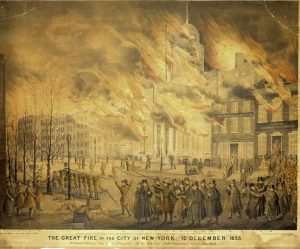 I was looking at fire damage in an old industrial building in Brooklyn and noticed that there were three distinct patterns. The photos below are from the top floor and the remnants of the hung plaster ceiling has been removed.

(I) First, in some places the fire simply burned through – exceeded the timed rating of the plaster, in modern terms – and enveloped the wood. 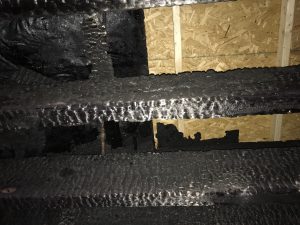 In other words, where the fireproofing failed completely, the joists were exposed to flame on all sides and are therefore charred on all sides.

(II) In some cases the plaster held together but the heat above it (possibly because of holes allowing hot air up) was still enough for charring to start: 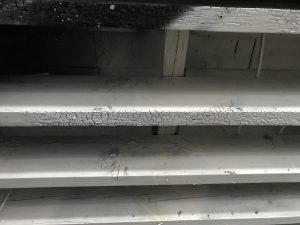 In those areas, the charring starts at the bottom of the wood, as you’d expect.

(III) The most interesting pattern is in the areas where the fire protection provided by the plaster worked, but there was a draft of hot air above the joists, flowing from failed ceiling areas elsewhere at (I) to holes in the roof. The airflow moved through the cockloft, over the top of the joists, so their tops are charred while their bottoms are not: 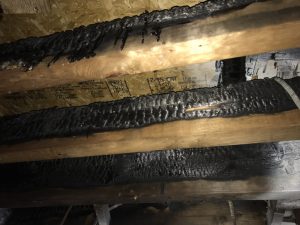 Seeing the joists now, with the ceiling fully removed, obscures the physical meaning of the different burn patterns. The lessons I am reminded of are that (a) even a damaged plaster ceiling can significantly slow fire spread, (b) you can’t “read” the damage properly without knowing what was there before the fire (in this case, the ceiling), and (c) cocklofts allow fire spread that wouldn’t exist otherwise and are therefore dangerous.