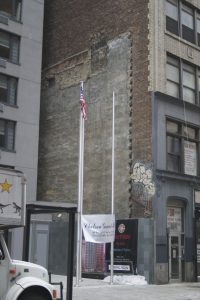 In a way, that’s the best ghost picture I’ve taken. It’s another old one, but it shows clearly how this phenomenon occurs. Here are the demonstrable facts:

Here are the inferences from those facts and the general history of construction in the city:

The ghosts exist because there was never a moment when they could be got rid of. When the loft building was constructed, the designers and builders and the option of making their building 6 inches narrower to avoid reusing the wall (and very few people in the city ever voluntarily make their buildings smaller) or reuse it; when the house on the left was demolished, the hotel had the choice of simply living with the ghost protruding onto their property (and stuccoing it for beauty’s sake and maybe waterproofing) or asking the owners of the loft building if they’d mind having their wall partly disassembled. So there it is, having survived both of the buildings it was originally part of.