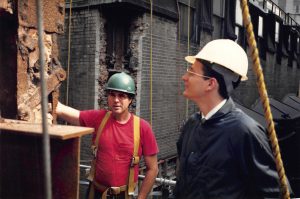 I try not to shy away from unpleasant topics here, so I have to admit that’s me on my first facade project in 1988. What was going through my head at that moment was something along the lines of “What am I supposed to do about that?” but I did eventually figure out how to repair that column. A few other thoughts about 31 years ago: