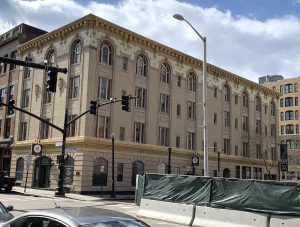 I don’t know Providence well enough to talk about the character of the city. Like a lot of small cities in the northeast, it’s had to move from manufacturing to a service economy, a transition that has probably been eased by the presence of several large educational institutions. A good percentage of the buildings downtown are from the late nineteenth century and most are architecturally conservative even for that era. The adjectives that come to mind,  particularly if you’ve read a lot of late-nineteenth-century architectural criticism, are quite Victorian: stolid, foursquare, respectable. A good number of buildings either were mills or simply adopted the mill aesthetic of common brick with minimal ornamentation. That’s all fine – I happen to like that look and quite enjoyed the general feel of the old buildings downtown.

And then there are the buildings that stand out. I talked about one yesterday, but there’s a more extreme example in the picture above. (Click on the picture to enlarge it.) It was built as the Dreyfus Hotel and has also served as a dorm and apartments. At first glance, the facades don’t seem so different from a run-of-the-mill circa 1900 building, but the longer I look at it the more decorated it seems. The first floor is nicely done romanesque brickwork; the general masonry of the floors above is more modern in design, with three colors of brick and some small pieces of green terra cotta embedded in the fourth-floor spandrel panels. But the decoration at the top of the fourth floor, with yellow and green terra cotta veneer, and the green, yellow, and orange water-table at the second floor are surpassingly frivolous for both the rest of the building and the cityscape around it. I think that’s great, and it also shows what a well-developed specialty supply industry can do for constriction: the catalogs of pre-fab architectural terra cotta may not have been endless, but the designs that architects could make with them seem to be. The cornice and the cornice brackets, the medallions, the water-table, and the flat veneer were all standard elements, but the way they were used here makes the building stand out even at 120 years old.

In summary, frivolity is good.