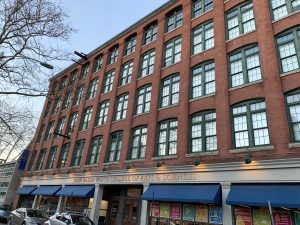 Yesterday, I mentioned mill-style architecture in Providence. Here’s an example. I suspect that the first floor is cast iron, but it could be steel with architectural sheathing. But buildings like this are, architecturally, all about the brick. As plain as this building is, there’s still a lot going on here. A short description of the brick might include the projecting piers (or recessed spandrel panels), the three-course jack-arch window heads, and the double-corbeled cornice. In other words, a lot of work was put in to keep this from being a flat and plain wall, even though this building did not get much in the way of ornamental treatment.

The most modern-looking aspect of the facade is the large size of the windows, and that is true for a very unmodern reason: before high-quality artificial light, people depended on windows for light far more than we do now. Industrial buildings, which tend to have larger floors than residential or office buildings, had a problem getting light into the back areas of the floors. So mid- to late-nineteenth century industrial buildings tend to have bigger windows than a lot of other buildings their age. One of the reasons cast-iron facades became popular in SoHo is that the material made it easy to incorporate large windows into the street facades.

This is worth repeating: the meaning of large windows has flipped on its head in the last 150 years: instead of factories needing the windows for light and residences using small windows for privacy, factories are now windowless boxes while residences can’t get enough glass. “The past is a foreign country; they do things differently there.”